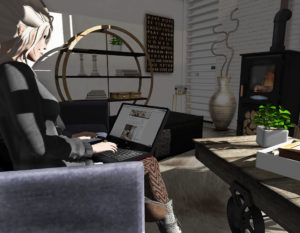 I make my living using cyber tools to better understand the “real” world. So, I’m the last person to bash the Internet or emerging social media. But because I spend so much time online I invest a significant amount of time and energy examining what is done well online and what isn’t.

There’s an old axiom that everything comes around again. You know, the old becomes new. Well, one of society’s lamentations has been that as TV became more widely available families stopped sitting down around the table for dinner together. TV trays were invented and people brought their food into the living room and all sat around watching the Boob Tube and no longer talked with one another.

As time has progressed people bought more than one TV per household and that availability of multiple screens coupled with 100s of channels led to even greater isolation as people weren’t even sitting in proximity to each other. Everyone grabs their own microwaved dinner or snack and retreats to their own space to watch whatever interests them and they no longer have to be inconvenienced by their siblings’, parent’s or children’s requests to change the channel. And now, the internet provides us with even more thinly sliced niches to explore.

Social media has arisen in response to people’s sense of isolation. The irony is social media tools far from bringing us together are further isolating us. Personal websites, Facebook pages, and Twitter are very useful for disseminating information to large groups of people. We post once and “broadcast” to our audience. But the question becomes just because you can do something, should you?

I’m sure sometime in your life you’ve heard the expression, “Think before you speak.” The same holds true with the Internet. Think before you post. Ask yourself why are you posting? Would you say what you’re writing to someone’s face? To paraphrase Dr. Phil, “How’s that work for you?”

A lot of people feel that without social media they wouldn’t be able to stay in touch with their friends because they’re too busy. I’d like to encourage you to rethink this. We all know long-distance relationships are difficult to sustain. Social media creates an artificial distance between us and our friends. It can also sustain the illusion that a true relationship actually exists. Text messaging, email, Twitter and Facebook are all substitutes for being there in the flesh.

At least when you call, people can hear your voice. You can hear the inflections, hesitations, and enthusiasm that are so very difficult to convey in writing. However, it does require more time and commitment to the relationship than a broadcast message.

I have no intention of stopping using social media, nor am I suggesting that you do. I just want you to stop and ask yourself what price you’re paying for the efficiency and “convenience”.

Sometimes nurturing your relationship with one or two friends over a cup of coffee can provide more nourishment for your soul and theirs than broadcasting spontaneous, empty, cotton candy updates to all of your friends.