Need a Job? I Have One – a women owned business 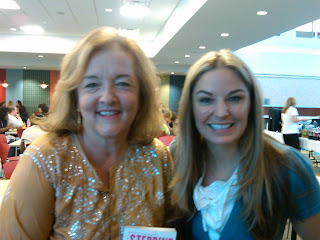 I spent the last couple of days in Boca Raton, Florida with some of the most amazing people that I have ever met. I am not one to go to a conference for women or women business owners but I needed to get inspired. I know the economy is bad. We hear it every day and that sucks. But, you know what, our business is growing and we are grateful. A trip to South Florida was fine with me and I got more inspiration than I expected.

Count Me In is an organization whose mission is to promote economic independence and the growth of women-owned businesses. Do you know how I found out about them? I was going through a stack of catalogs deciding which ones to read and which ones to recycle and I saw the Costco Connection. Now I love Costco. I just do. I saw Theresa Alfaro Daytner, owner of Daytner Construction Group on the cover. I read the article and you can read it too.

I signed up for the 3-day event. What the heck.

I had the privilege of meeting Nell Merlino, the creator of Take our Daughters to Work Day, author of “Stepping Out of Line”, and the leader of The Count me In Women’s organization

https://www.countmein.org/. (That’s her in the picture with me)

I want to focus on one of the many outstanding things that Nell said. And, I am taking liberty in paraphrasing. The biggest issue in the United States today is the unemployment rate. What is wrong with the country is that people are not working. Fear is stalling growth.

Even the female business owners in this conference were hesitant to hire employees, which means as the leaders of our companies we are taking on more and more work. I looked this up and it’s real according to The Bureau of Labor Statistics released September 23, 2009: The national unemployment rate was 9.7 percent in August 2009, seasonally adjusted, up from 9.4 per-cent the prior month and up from 6.2 percent a year earlier. Yep, that means 1 out of ten people in the United States are out of work.

She went on to talk about this being a very tough year. And, I agree, and it does seem like everyone is waiting for someone to fix this or the government will throw enough of our money at it to make an impact. Then she said something amazing. I wrote it down. “What if we could?” And, I thought what if we could what, Nell? Are you actually suggesting that the 100 female small business owners in this room fix the economy? Really.

She told a story about women and war. No, not about a cultural icon, Rosie the Riveter – we have all heard it; she talked about how during World War I, even though very few women worked outside the home they took the place of the men who had gone off to war and worked in factories and on the farms. Teddy Roosevelt even provided uniforms with pants (very few women wore pants back then) and women ended the food riots by harvesting the crops and planting Victory Gardens. Women in the U.S. and Britain brought in the crops (see Farmettes and Land Girls).

Women get it done when the chips are down.

Back to “What if we could?” She said, “What if everyone in this room hired one person when they got back to their business?” It’s about personal responsibility and accountability and the belief that the show goes on (according to me) and again, I think she is right. That would put 100 people to work and the family, community, and economic impact of that does matter. There is a ripple effect. However, is it significant? Well, there are millions of female and minority-owned businesses and if everyone hired one person we would put millions of people back to work. Yes, it is significant.

· 10.5 million businesses are owned by women in the United States*
· Women-owned businesses employ approximately 27 million people
· Women own 48% of all businesses in the United States
· Women business owners contribute more than $3.6 trillion to the marketplace each year
· Women account for more than 70% of consumer spending
· 55% of women provide half or more of their household’s income, yet 48 million women — that is 80% of all women in the workforce — earn less than $25,000 a year**

What if every corporation or business regardless of the gender of the owner (who cares!) added one employee this month or next month? Why wait for our government to get it right? Why not do what we do and get down to business. Every woman that I met this past week was a woman that meant business. And, many of these women run multi-million dollar businesses.

One of my favorite comments of the day was from one of the few men in attendance. An executive from Office Depot (a sponsor of Count Me In and the wonderful folks at Office Depot are the topic of my next Blog) had supported, attended and listened to the comments from women for 3 days. And, he said, “If the women in this room are representative of other businesses run by women then I feel comfortable in saying we’re good. The U.S. is good.” Everyone applauded because he is right. We are good. We are an amazing country with people that have a can-do attitude. Turn off CNN (Constant Negative News) before you spiral into depression and think about what you can do to chip in.

I am proud that Mindspot Inc, is a state of Florida certified Female/Minority-owned business enterprise and I am proud to belong to Count Me In, an outstanding organization that helps women build their lives and their business.

So in closing, what are you going to do? I would love to hear your feedback. Post a comment because I know you have something to say. I have a job opening. Email us for the job description at info@mindspotinc.com.